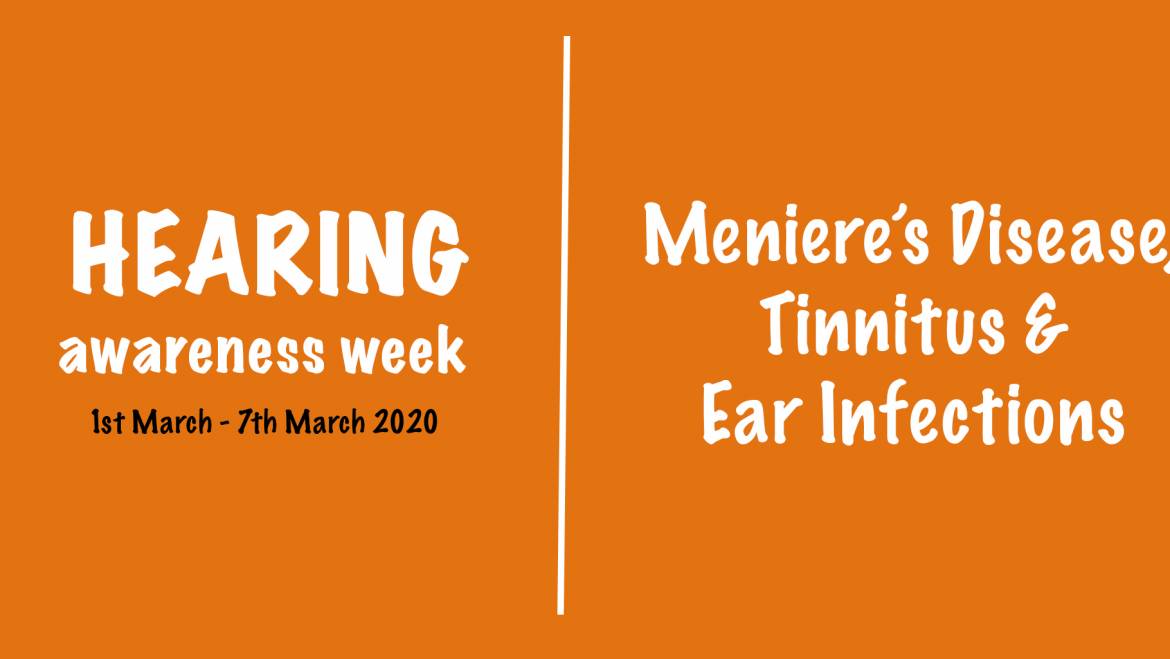 All you need to know about;

What is Meniere’s Disease?

Meniere’s disease is a disorder of the inner ear that causes severe dizziness (vertigo), ringing in the ears (tinnitus), hearing loss, and a feeling of fullness or congestion in the ear. Meniere’s disease usually affects only one ear.

Meniere’s disease can develop at any age, but it is more likely to happen to adults between 40 and 60 years of age.

The symptoms of Meniere’s disease are caused by the build-up of fluid in the compartments of the inner ear, called the labyrinth. The labyrinth contains the organs of balance (the semicircular canals and otolithic organs) and of hearing (the cochlea). It has two sections: the bony labyrinth and the membranous labyrinth. The membranous labyrinth is filled with a fluid called endolymph that, in the balance organs, stimulates receptors as the body moves. The receptors then send signals to the brain about the body’s position and movement. In the cochlea, fluid is compressed in response to sound vibrations, which stimulates sensory cells that send signals to the brain.

In Meniere’s disease, the endolymph buildup in the labyrinth interferes with the normal balance and hearing signals between the inner ear and the brain. This abnormality causes vertigo and other symptoms of Ménière’s disease.

Why do people get Meniere’s Disease?

How is Meniere’s Disease treated?

Meniere’s disease does not have a cure, but your doctor might recommend some of the treatments below to help you cope with the condition.

Medications. The most disabling symptom of an attack of Meniere’s disease is dizziness. Prescription drugs can help relieve dizziness and shorten the attack.

Salt restriction and diuretics. Limiting dietary salt and taking diuretics (water pills) help some people control dizziness by reducing the amount of fluid the body retains, which may help lower fluid volume and pressure in the inner ear.

Other dietary and behavioural changes. Some people claim that caffeine, chocolate, and alcohol make their symptoms worse and either avoid or limit them in their diet. Not smoking also may help lessen the symptoms.

Cognitive therapy is a type of talk therapy that helps people focus on how they interpret and react to life experiences. Some people find that cognitive therapy helps them cope better with the unexpected nature of attacks and reduces their anxiety about future attacks.

Injections. Injecting an antibiotic into the middle ear helps control vertigo but significantly raises the risk of hearing loss because the medication can damage the microscopic hair cells in the inner ear that help us hear.

Surgery may be recommended when all other treatments have failed to relieve dizziness.

What is the outlook for someone with Meniere’s disease

Scientists estimate that six out of 10 people either get better on their own or can control their vertigo with diet, drugs, or devices. However, a small group of people with Meniere’s disease will get relief only by undergoing surgery.

Tinnitus is commonly described as a ringing in the ears, but it also can sound like roaring, clicking, hissing, or buzzing. It may be soft or loud, high pitched or low pitched. You might hear it in either one or both ears.

To read more about tinnitus, click here to see our previous blog.

What are Ear Infections?

An ear infection is an inflammation of the middle ear, usually caused by bacteria, that occurs when fluid builds up behind the eardrum. Anyone can get an ear infection, but children get them more often than adults. Ear infections are the most common reason parents bring their child to a doctor. The scientific name for an ear infection is otitis media (OM).

What are the symptoms of an ear infection?

There are three main types of ear infections. Each has a different combination of symptoms.

Acute otitis media (AOM) is the most common ear infection. Parts of the middle ear are infected and swollen and fluid is trapped behind the eardrum. This causes pain in the ear—commonly called an earache. Your child might also have a fever.

Otitis media with effusion (OME) sometimes happens after an ear infection has run its course and fluid stays trapped behind the eardrum. A child with OME may have no symptoms, but a doctor will be able to see the fluid behind the eardrum with a special instrument.

Chronic otitis media with effusion happens when fluid remains in the middle ear for a long time or returns over and over again, even though there is no infection. It makes it harder for children to fight new infections and also can affect their hearing.

What causes an ear infection?

The ear has three major parts: the outer ear, the middle ear, and the inner ear.

The outer ear, also called the pinna, includes everything we see on the outside—the curved flap of the ear leading down to the earlobe—but it also includes the ear canal, which begins at the opening to the ear and extends to the eardrum. The eardrum is a membrane that separates the outer ear from the middle ear.

The inner ear contains the labyrinth, which help us keep our balance. The cochlea, a part of the labyrinth, is a snail-shaped organ that converts sound vibrations from the middle ear into electrical signals. The auditory nerve carries these signals from the cochlea to the brain.

Other nearby parts of the ear also can be involved in ear infections. The eustachian tube is a small passageway that connects the upper part of the throat to the middle ear. Its job is to supply fresh air to the middle ear, drain fluid, and keep air pressure at a steady level between the nose and the ear.

Adenoids are small pads of tissue located behind the back of the nose, above the throat, and near the eustachian tubes. Adenoids are mostly made up of immune system cells. They fight off infection by trapping bacteria that enter through the mouth.

How is an acute middle ear infection treated?

Many doctors will prescribe an antibiotic. Your doctor also may recommend over-the-counter pain relievers or eardrops to help with fever and pain.

Natural Hearing is a service provider for people with hearing difficulties. Accredited by the Australian Government to provide services to individuals on pension and Veteran Affairs. Learn more about Natural Hearing.